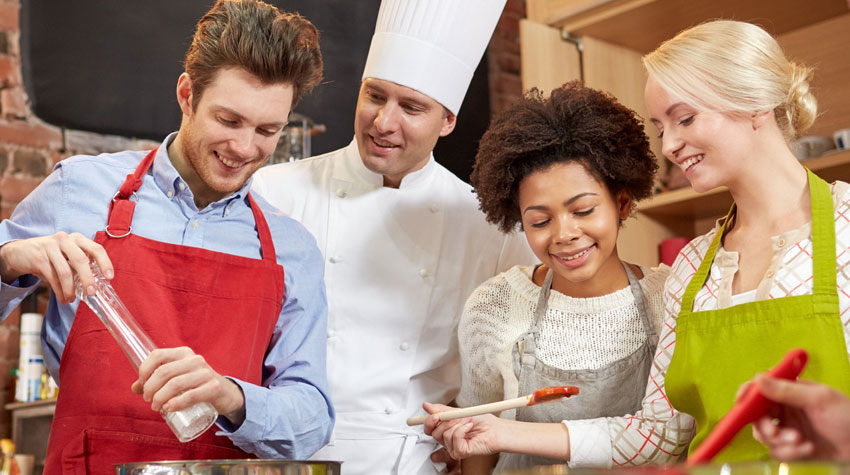 As the owner of nine restaurants in the Denver area — including Mizuna, Osteria Marco, Russell’s Smoke House, and Bones — Chef Frank Bonanno holds education and community at the heart of his business. Five years ago he launched the Chef Cooking Series, cooking classes in which the restaurant chefs prepare signature dishes for a small group, as another way to connect with his guests.

“It’s a fun way for us to interact with our guests and do something fun and different,” says Frank. “Our guests can come in and meet the chefs that cook their food and have a very intimate cooking setting.”

The classes are structured as fall, winter, and spring series, with about 15 classes in each. Frank hosts three or four of the classes himself, and his chefs take the lead on the rest, choosing the recipes and dishes they want to demo for each session.

The Chef Cooking Series has become an important part of the Bonanno Concepts brand and repertoire. Here, Frank explains how other restaurateurs and groups can make the most out of cooking classes.

Give your chefs the opportunity to shine.

Since Frank is the face of Bonanno concepts, he loves that cooking classes give his chefs a chance to engage face-to-face with guests.

“I think sometimes the chefs are a little overshadowed by my name, so this gives them the opportunity to sit with people,” says Frank. “It helps them get their name out there.”

Plus, since the chefs have freedom to choose the subject of the classes, they can have true ownership of the event. Frank says one of his chefs held a crock pot class and had four crock pots going at once in preparation. “He was so excited to do it.”

Don’t be afraid to be scrappy.

If you think you need a dedicated space to hold a cooking class, think again. Frank’s team hosts them in the various restaurants and sets up tables for the group and Bunsen burners for the demonstrations. At Bones, he has a counter that makes a great stage for a cooking class, but he makes it work at the other restaurants, too.

“We try to do something that fits the theme of the restaurant,” he says. “I did a lobster mac and cheese class at Mizuna; at Smokehouse, [Chef] Ryan [Higgins] is doing a rubs and sauces class.”

Additionally, the classes fill up without much marketing effort on the part of Bonanno Concepts. Frank promotes the series in his newsletter to guests, but since the classes are relatively small (12 to 15 people) they sell out quickly.

“We’ll show you three or four dishes, and as we make them we put them up for everybody to eat,” says Frank. “They’re not really hands-on, but they are intimate.”

Engage with your most loyal customers.

The vast majority of cooking class attendees are guests who dine frequently at Frank’s restaurants. That cross-promotion creates a positive cycle of good will between the chefs, restaurants, and diners and ultimately serves as a powerful branding tool for the group.

“What we find is that the guests love it — it’s fun for the chefs to do and it’s fun for guests to come in and participate,” says Frank. “It keeps us involved in the community.”

He adds that it’s not uncommon for the same guests to come to multiple classes in a series. Ultimately, he’s able to foster deeper relationships with his best customers through the classes.

Demo dishes people can (and will) make at home.

Frank’s best advice for other chefs or restaurateurs considering cooking classes: “Do something that people want to learn to make at home.”

It sounds obvious, but it’s key to a successful class. Skip the seared foie gras and be wary of tedious projects like hand-rolled pasta, he says. Instead, spend time on dishes that people will actually replicate themselves, like the crock pot dishes, which are perfect for a weeknight dinner. Similarly, one of his chefs held a potpie class a couple of years ago that had a 30-person waiting list.

“You need to keep it simple and make stuff that people want to eat — that maybe you’re not serving in the restaurant that’s just fun,” says Frank. “Cooking should be fun.”